The 3 C's of Grilling With Beer

There is truly a special relationship between BBQ and beer.  These two friends have been married in the backyard for what seems like forever. This BBQ ritual has been passed down through generations.  My father once told me the rule is, whenever you BBQ, you must have a beer.  So from then on, I’ve followed suit. In my adventures as a grill master with Weber, I have been able to do some pretty amazing things.  A couple of years ago I attended a three day beer school compliments of Sam Adams. I know, I know…rough life. There were many key takeaways from this education, but one was the three C’s… cut, contrast, and compliment. These three simple words have helped me take my BBQ and beer game to another level.  Keep in mind that this is still about balance. You do not want to be heavy on either side because it will overpower the other.

Cutting allows you to cut through heavier flavored food using the beer’s carbonation and bitterness.  BBQ’d pizza, mac and cheese, chicken wings, and cheese curds are favorites of mine because I use the beer to cut through the cheese and bring out flavors of both the bbq and the beer.  Beers in this category - IPA or Lager.

When addressing this category, think polar opposites. Items heavy in flavor, like BBQ, need something lighter to contrast in order to avoid losing the flavor of the BBQ.  By choosing things at the polar opposite of the other, you actually bring out differentiating flavors and provide more layers of taste. Beer of Choice- IPA or Stout.

When considering this category, think of flavors that are pretty neutral.  Chicken and fish come to mind first because they are not very fatty, hence they are pretty mild in terms of flavor.  A mild dish and a mild beer will actually provide you a high level of flavor for each. Both items bring the best out of each other and deliver a much more flavorful meal. Beers of choice - Lager, Wheat, Stout or Porter.

When cooking BBQ my favorites pairings are lagers and wheat beers. They are lighter on flavor and both cut and compliment the food. I want the food to be the highlight and these beers truly allow that to happen.  When grilling with beer I prefer lagers, stouts and porters. Lagers are awesome to baste and cook with because the natural sugars help caramelize food like burgers, pork chops, steaks, fish and chicken. When I braise or roast, stouts and porters help provide a nice added layer of flavor which makes food pop and taste outstanding. The best part of cooking, pairing, and enjoying beer with great food is that there are no “real” rules.  I always stick to the basics. I grill what I like and I drink what I like! Using the above tips will raise your BBQ game and beer experience to another level! 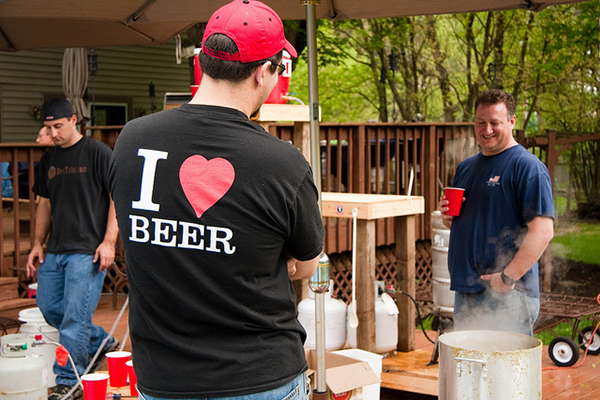 The Perfect Marriage: Camping and Grilling
by: Kelsey Heidkamp

Why Go Out?
by: Mark Fenne

Quick Tips to Help You Prepare for Winter Grilling
by: Jennie Lussow